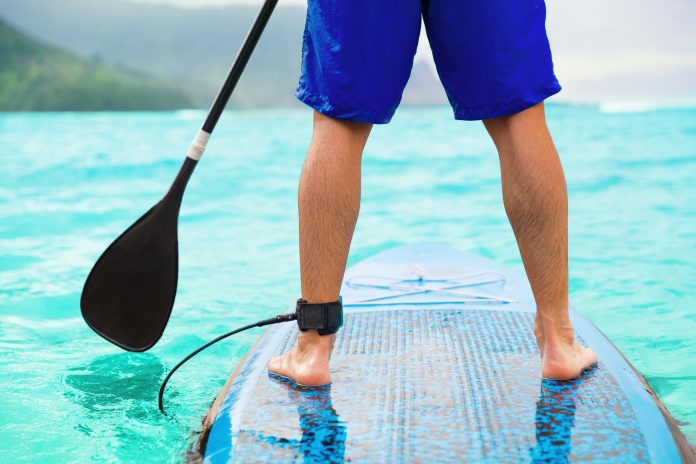 Are inflatable paddle boards any good?

That’s a question we’ve received so many times… Only one answer:

The ease of transport is merely one aspect where the inflatable SUP’s exceed.

There’s also the storage, the flexibility of launch area, stylish options and believe it or not – the tough exterior I would argue is better of an inflatable paddle board than that of a hardboard SUP!

Let’s break this down.

Why are they so good?

Okay so if you are Hercules, of course, this may not apply. If you have a little frame, despite the weight of an object, maneuvering large items like hardboards isn’t done eloquently.

Using inflatables the time you’ll spend heaving boards around is now equally spent on inflating them – a much safer activity for everyone around.

Majority of people don’t have the luxury of owning a van or truck, especially in the city, smaller cars are more viable. So transporting large hardboards is almost impossible. With inflatables, no roof racks are needed, no awkward head balancing is required and even if you only own a motorbike, you can still own a paddleboard! Talk about flexibility!

Now if I just put this there and then that goes… Umm… There… Then, well this can… Hmmm… Nope!

Do you have a spacious garage to keep all your fun things in? We know the reality is most of you will answer no. Many of us live in apartments or units and space is limited.

Efficient storage is vital in small space. A hardboard SUP could be utilized as a tabletop or even a spare bed if the fins are removable! Though it seems kind of ridiculous.

Inflatable SUP’s store easily under your bed, in a cupboard or we approve of leaving them in your car trunk!!

Imagine watching the hoards of tourists launching off on their SUP’s, kayaks, canoes… all huddled like a pod of pelicans on the hunt as they try to set off and there is you walking up the riverside with your inflatable on your back… You’ve skipped out on the hustle of the launching area, you have found yourself the utmost solitude and miles ahead so it will be kept that way.

These kind of dreams are as quickly deflated by the reality of owning a hardboard. The options of where you can take your SUP grow exponentially when you have an inflatable.

Oh, darling that board I just must have it!

Are you one of those stand up, to stand out people?

As in you love to SUP but you also love to look good when you SUP?

There is NO shame in admitting we like to look good, we’re just not allowed to put others down for not wanting the same or think ourselves better for it.

So why not rejoice in being able to play around with designs for your SUP?

Hardboards have a tendency to come in two or three tone colors. It’s not as if it’s as drab as a cemented sidewalk but those tones are not nearly as aesthetically pleasing as a fake wooden deck like on the Thursosurf for example.

I mean you could buy a wooden hardboard and if you can afford to do so, why wouldn’t you! Though let’s be real, most of us can’t.

The process of pattern design on an inflatable is simpler and cheaper than doing fancy patchwork on a hardboard, so you’ll find glitzy and glammy SUPs more prominent in the inflatable category.

The question on everyone’s mind…

Is an inflatable as durable as a hardboard?

I’m all for the honesty so I’m going to present my balance viewpoint on this.

If you buy an inflatable SUP that has 4” thickness (not recommended) or doesn’t use drop stitching (also not recommended) and only has a single layer of PVC (again – don’t do it) then a hardboard paddle board will win. Always.

If you look to purchase a high-quality inflatable sup with anything above 4” thickness, at the minimum a triple reinforced PVC layering with drop stitching – you may find that you come out on top against a hardboard.

Again this depends on the hardboard you are comparing it to. Is your hardboard epoxy? Or is fiberglass? So many variables!

There is a term “Drop Stitching” which for most people you’ll be like drop-what?

Drop stitching refers to a technique used in the manufacturing of inflatables that require high-pressure levels of inflation.

Imagine thousands of threads between an inner layering that when stretched become extremely taut. As they stretch further, the stronger they become. Which is why you’ll find SUP’s that can be inflated above the recommended 15 PSI to feel more solid under your feet and perform better!

This one layer alone isn’t 100% airtight so then multiple layers of PVC are added. These extra layers encapsulate the concrete innards and make for an indestructible board.

Think about it this way – would a rescue guard use their inflatable dinghy if they thought it wouldn’t withstand the commotion of a flood or turbulent seas?

I ask this because you’ll notice at a closer look that SUP’s and dinghies use the same materials and technology to achieve the same levels of rigidness and durability.

Dinghies do tend to have more than one inflatable chamber unlike a SUP, which increases safety, however, the durability of those dinghies is a statement to high-quality SUP’s.

If you were to run aground sharp rocks or hit a large submerged trunk on your hardboard it could cause dents that can fill with water and bog your board down. An inflatable is more likely to bounce off and only have its outer layering worn down under the same circumstances (also not good) than completely puncturing. Both are easy fixes, though one is instant.

On an inflatable, you can patch your boo’s boo’s instantly and the chance of water having leaked in is much less. Most iSUP’s will come with a repair kit that includes patches. Take note though that due to transporting restrictions you’ll need to buy glue separately.

You also will know straight away if you have because it also means your board will no longer be inflated!!

Hardboards when dented hard enough take on water and you may need to leave your board in the sun a full day before repairing the damage. There is no real way to know if your board has taken on water or not either unless it’s been a significant amount, then you’ll notice the weight difference.

SO, WHAT DO YOU THINK?

Please enlighten us with your opinions on what you think about inflatables. The market is still a relatively new one and there are constant upgrades and improvements to inflatable products. So what you dislike may have already been addressed!

Yes, stigmas still exist they aren’t tough enough, though, with time, this will change I believe. It wasn’t that long ago the internet was a fabled idea, now look at us!

Take a moment to browse through our inflatables or check out some beginner guides we have when it comes to buying your own SUP.