Home Blog The History of Kayaking 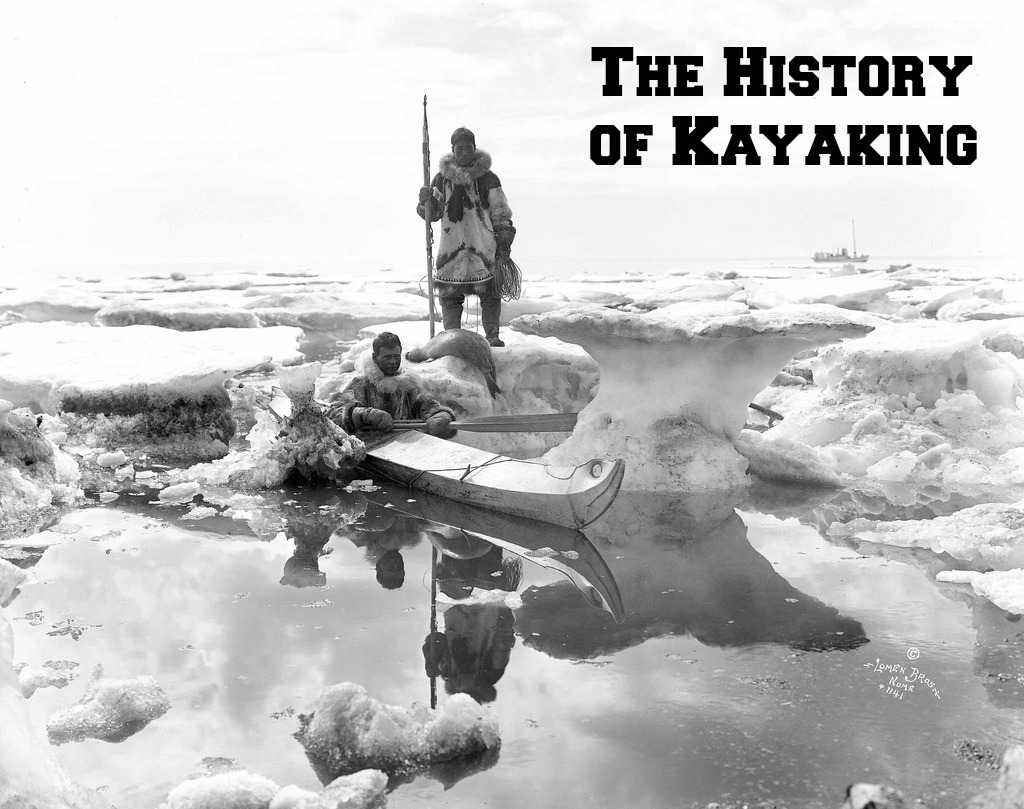 Ever wondered about the origins of kayaking? With kayak history stretching as far back as 4000 years, you can bet this vessel has a tale or two to tell.

Even if you’re not a history buff, you’ll certainly enjoy this post (and learn something) as we explore the history of a sport and past-time loved by many. So, without further ado…

Many people think that the Inuit and Aleut tribes of North America constructed the first kayaks. However, to the best of our knowledge, kayak technology actually began among the Koryak tribes of northern Russia. The vessels first appeared as round coracles used for fishing. These kind of designs migrated across the Bering Sea, extending across the Arctic and well into southeast Alaska and onward to Greenland where the technology seems to have halted well shy of reaching Europe for reasons unknown.

Hence, not all tribes that made use of the kayak lived in barren, harsh, Arctic environments but, they did all live in cold environments.

Therefore, in order to survive, Inuit natives consumed a lot of protein, as protein causes a significant increase in metabolism and generates body heat.

Now, this next part isn’t in the history books and comes straight from my imagination.

Picture a native Inuit hunter stood upon a beach observing seals and walruses just offshore. Frustrated with such a large bounty just outside of his reach, he gets busy building. He already has some boatbuilding knowledge from being exposed to the Koryak kayak, but he takes it upon himself to create a new, superior vessel.

He builds a frame from driftwood and/or whalebone and covers it with either seal or walrus skin. Whale fat is used for waterproofing and seal bladders filled with air help with buoyancy. After several failed launches, some experiments with dimensions, and some lessons learned in buoyancy; the Inuit kayak is born.

The hunter proudly paddles out to where the game is, successfully hunts his unsuspecting prey, and then lives happily ever after, a hero among his tribe and celebrated as the inventor of the kayak.

So, our first lesson is that kayaking was not a recreational sport for the Inuit but, was instead, a dangerous and potentially fatal pursuit undertaken out of necessity to provide food and resources for their families.

The Evolution of the Inuit Kayak

Since that first kayak was built, native Inuit kayaks have undergone hundreds of years of research, development, and refinement. By the early 1800's, Inuit kayak design had become so advanced that numerous different models existed to handle the waters in which they were commonly used.

For instance, the Aleutian Islander's had long, slim, fast kayaks called "Baidarkas" which also had two or three cockpits for multiple passengers. Those that hunted in the ice flows in the far North had short, wide, highly maneuverable kayaks.

There were also larger vessels used mainly for transportation called Umiaks. These boats were more canoe than kayak, and usually had more than one paddler.

The general principal of skin-on-frame kayak technology was known in Europe at the time. Several men attempted to design and market skin-on-frame folding kayaks for recreational purposes with varying degrees of success.

Then, a young German architectural student named Alfred Heurich used the technology to create the "Delphin" in 1905 which was the first successful "folding" skin-on-frame kayak. The Delphin was constructed using a bamboo frame and a sail cloth skin that was designed to be dissembled and carried in three bags.

Around this time, Europe's middle class were experiencing a rapid expansion in income, and numerous people were looking to enjoy a quiet day on the water – an activity previously reserved for the wealthy.

The demand for recreational kayaks lead another enterprising German fellow named Johannes Klepper to modify Heurich's original design to create and market the first commercially successful, folding, skin-on-frame kayak called the "Flatboot" in 1906. Produced at his factory in Rosenheim, Germany, Klepper's folding kayaks quickly became very popular and were soon a common sight on the lakes and more sedate rivers of Europe.

Last but not least, there was a Swiss gentleman named Walter Hon who designed and built the first Swedish folding kayaks in the early 1920's that he called "Folboats". The kayaks became very popular with the general public and successfully competed with Klepper's "Flatboot".

Consequently, Klepper and Folbot are two of the oldest commercial manufacturers of folding kayaks and both companies are still in business today.

However, despite ancient and modern folding sea kayaks being very tough and nearly impossible to damage, many paddlers are uncomfortable with the idea of having a flexible hull between them and the water.

How safe would you feel having flexible material in the middle of your kayak when you’re in deep blue water?

The origins of the modern sea kayak begin with a Scottish gentleman by the name of John McGregor who, in 1865, built and extensively paddled a "canoe" (the British name for kayaks) that he called the "Rob Roy".

The kayak was modeled on sketches of native Inuit kayaks. However, McGregor's kayak was actually more akin to an English Coaster in shape and size than it was to a native, Greenland style, kayak.

The evolution of the hardshell, sea kayak was then brought about by another Scotsman named Ken Taylor who, in the summer of 1959, made a one-man expedition to western Greenland, bringing back an original Inuit kayak on his return to Scotland.

This particular kayak elicited much interest amongst European students of native Inuit kayak design. It was a real-life example of the West Greenland style and as such, it was far truer to form than the one originally developed by John McGregor.

Consequently, this kayak was copied a number of times with the most notable version constructed by Geoff Blackford in 1971. However, because Blackford had a larger stature than most native Greenlanders, he redesigned the kayak to accommodate his larger physical size. But, unlike John McGregor, his kayak retained the basic design of the original Greenland kayak.

The result was a plywood, stitch-and-glue, model that measured 17 feet in length and 21 inches in width, but was otherwise identical to the Greenland, skin-on-frame kayak.

Blackford's kayak immediately became popular among British paddle clubs and was used to create a plug for a fiberglass mold. The mold eventually found its way to an English entrepreneur named Frank Goodman who decided to put it into commercial production under the name of "Anas Acuta" (which is the Latin name for the Northern Pintail Duck).

This decision gave birth to Valley Sea Kayaks who went on to become the first, successful, commercial producer of modern, hardshell, sea kayaks.

However, our story does not end there, but instead continues with a noted British mountaineer and proponent of outdoor education named Colin Mortlock.

After the successful introduction of the Anas Acuta, Mortlock proposed an expedition by sea kayak that was to start in Great Britain and follow the arctic fiords of Norway to a place called Nordkapp which is the northern-most cape of Europe.

As a pre-trip test, Mortlock and his team decided to use the new, composite, Anas Acuta sea kayaks to circumnavigate the Isle of Skye in Great Britain. Storage space was limited during the short voyage and Mortlock and his team decided that a new type of kayak was required for the expedition. This lead to Frank Goodman redesigning the Anas Acuta to create a new "expedition" kayak that was capable of carrying more supplies without sacrificing either seaworthiness or maneuverability.

Goodman started with his original Anas Acuta design, but he also incorporated elements of modern boat design which included a higher volume hull and a rounded bilge that was capable of carrying the extra load required.

Since this new kayak was specifically designed for the Nordkapp expedition, he decided to name the new model "Nordkapp".

After extensive test paddling in the waters around England and several modifications to the new design, Mortlock and his team successfully made their intended journey to Europe's northern cape; making Frank Goodman's new "Nordkapp" kayak design the single most famous sea kayak ever designed.

Since the introduction of the Annas Acuta, there has been an explosion of kayak manufacturers and designs and kayaks are continuously improved with advancements in material technology. What was once driftwood and animal fur, became polished wood and fabric, which was then replaced by fiberglass, and eventually, plastic. Modern kayaks are typically constructed in a rotational molding machine from polyethylene and come in many different shapes and sizes. They bear little resemblance to their Inuit-made ancestors, with computer aided design and machine manufacturing ensuring millimeter-perfect fitness-for-purpose.

Incidentally, replacing fiberglass with hard plastic produced shorter, lighter, kayaks with increased maneuverability that were also more durable. This led to a whole new use for kayaks through the adventure sport of whitewater kayaking.

There are now hardshell kayaks to suit paddlers of all ages, sizes and skill levels and cater to every water activity imaginable. We now have kayaks designed for bombing down raging rivers, playing in the surf, open ocean racing, going on multi-day excursions, and lots of other recreational activities such as kayak fishing and photography.

I can't help but wonder what that lone, Inuit, hunter would think if he knew that his simple invention - born out of necessity to feed his family - would eventually lead to a thriving industry and a past time loved in every corner of the globe.