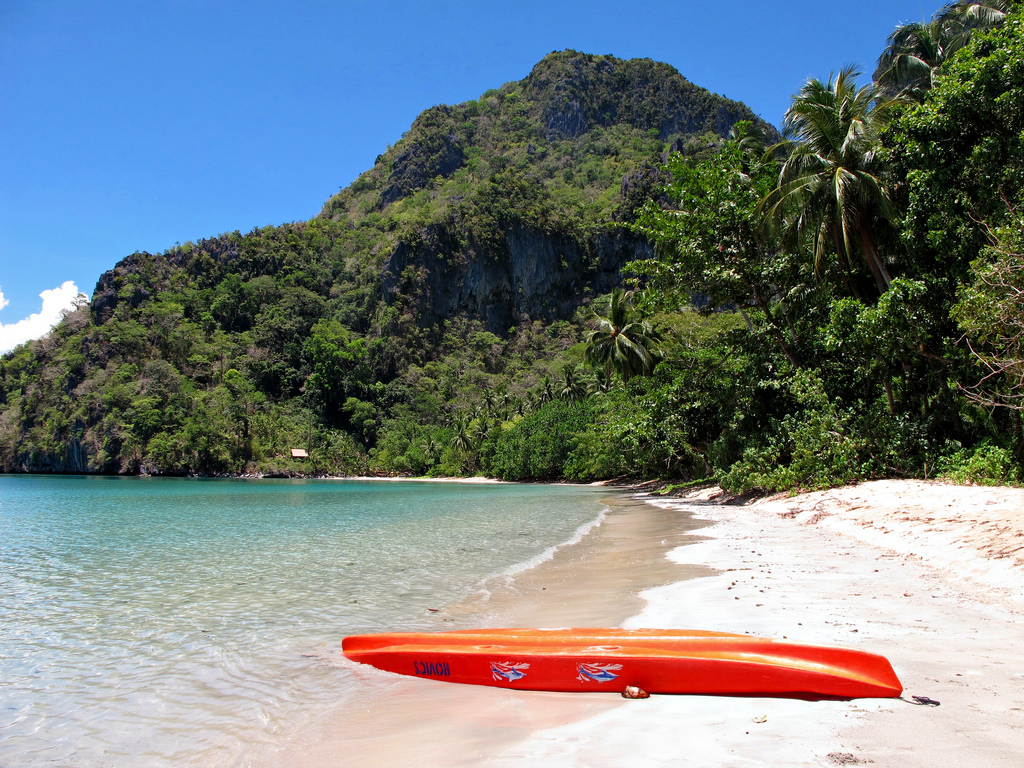 Choosing your next adventure kayak destination can be difficult. Either information overload paralyses you, or you’re stumped by the absolute lack of any resources on your exotic, far-flung choice.

Then there’s the decision between splitting waves with a beach holiday, or embracing the full force of nature with an inland river expedition. Salty water and sunshine? Or the rush and thunder of white water?

If you can’t decide, I’m going to suggest you try a destination that has it all; the Philippines.

A Kayak holiday in the Philippines will allow you to relax and soak up the sun and views of coral reefs through crystal clear waters. Or if you’d rather have your adrenaline peaked, you can bomb down raging rivers.

And you need not worry about where to go when you get there; our guide to kayaking in the Philippines explores all the top destinations as well as a few barely-known, national treasures. Palawan beach is world renowned for its sandy white beaches and crystal clear waters. Bacuit Bay is one of the most picturesque parts of the beach.

Don’t forget your snorkel. The crystal clear waters here offer excellent viewing opportunities for those marine biology enthusiasts out there. January to March are the best months to swim amongst the corals.

The bay is better suited for a lazy paddle during a relaxing holiday. Weak currents and welcoming water temperatures make this a great place for holidaymakers and beginners of all ages.

The water temperature is very mild all year round. You can expect 24-26°c from December to March, and 26-29°c from April till November.

However, it’s not all sunshine and blue skies. From early October, all the way until January is considered Monsoon season with heavy rains and high winds lashing down on all of South-east Asia.

The waters aren’t off-limits during Monsoon season but expect stronger currents, lower temperatures, and less visibility. Traditionally, February is the safest month to go, with the waters are at their calmest and most inviting. For the more adventurous among you, be sure to check out Bulsa River in Tarlac, San Jose.

Being a grade II, Bulsa River is perfectly suited for kayakers new to river kayaking. It’s not too boring that you’ll fall asleep, but not too challenging (or dangerous) for first timers.

This river has wide open channels with few rocks to navigate, so unless you're extremely rusty with your manoeuvring, or you’re equipped with the wrong kayak, this river should be a breeze. More experienced kayakers may wish to look elsewhere for their thrills.

The river winds on for 12.5 km, which should take about four hours to complete taking into account stretching and warming-up, capsizes, and the occasional rest break.

A word of caution if you’re paddling Balsa River during the rainy season: remember that Grade II rivers can swell and quickly become raging torrents after heavy rainfall. If you find yourself in fast-moving water, don’t attempt any rapids without experienced local guides and safety kayaks nearby. Sea kayaking in the Philippines doesn’t come much better than Boracay.

The attraction for paddle enthusiasts is not so much the corals of Boracay – although they are certainly beautiful - but the chance to soak up the magnificent views of the island from the sea.

The small islands shoreline stretches some 20 kilometres making an around island tour an ideal day trip for beginners. Open, sit-on-top kayaks can be hired from the many vendors around the island.

The temperature remains mild throughout the year ranging between 25-32°c. The best time to visit Boracay would be between February and March, with the temperatures being comfortably warm, average rainfall being the lowest, and the monsoon season still months away.

Speaking of the monsoon, at Boracay, it’s reported to between July and September. Besides the frequent rain, there will also be increased humidity, and the temperature will climb to 28-38°c. Chico River is an interesting find - a gem in the rough if I may say so. It’s not very well known as its nestled deep in the Cordillera and Cagayan Valley regions, and supporting infrastructure is not very well developed. Getting to the river is an adventure in itself.

Those that do make the trek will be rewarded with 175km of pristine river that winds through lush, green countryside. The portion of the river suited for kayaking and rafting stretches 72km from entry point to the finish.

Chico River is best reserved for experienced kayakers looking for a thrill seeking ride. It’s graded as a class III+, indicating the level of challenge on offer.

The rapids range from class I all the way up to V, so the river is not for the inexperienced, or the feint hearted. Come physically and mentally prepared.

However, it’s not all pedal-to-the-metal, white-knuckle action. Chico River is one of those classic "nature" rivers, and there’s parts where you’ll lazily wind through jungle regions and have time to marvel at the wildlife. But don’t get too relaxed, the next set of rapids is never far away.

Chico River makes great paddling all year round, but it’s best to check the condition of the river with a local guide closer to the time you plan on kayaking. If you want to get off the beaten path, try visiting Uacon Lake in Candelaria, Zambales. This beautiful lake remains largely undisturbed and peaceful unlike some of the other touristy destinations in the Philippines.

Uacon Lake has calm, brackish water which soon becomes saltier and choppier as you head closer to the ocean.

It’s suggested you start off at the lake, and then paddle out following the outflows to sea, through the mangroves, and then crossing over to the tiny island of Potipot for a break. There you’ll be greeted with turquoise blue water and white sandy beaches. It’s the perfect place to kick back in the sun and enjoy some refreshments.

If you don’t feel like leaving, you can always rent one of the small nipa huts or pitch up your own tent. Just remember to bring food and water as there are no restaurants on the island.

Like other Island getaways, October to May is the recommended time to visit due to the monsoon season. Davao River is a class III river that is similar to Chico River. Most of its 150 kilometres is a wide channel with tame flows, but there are two class IV rapids for the thrill seekers.

There are numerous tours of the river, many of which average around six hours. If you think that’s too short for a day trip, just remember; it's a class III, you will be tired.

Most of your journey will allow you to kick back and absorb the natural beauty of the Philippines. The river is surrounded with beautiful, mountainous forests that are broken up by farmland and small settlements peppered along the river bank.

It’s recommended to go with a local guide, as you’ll gain a much better insight and appreciation of the local flora and fauna.

As with most whitewater rivers - it’s open all year long! Cagayan De Oro is a fast-flowing river better suited to the more experienced kayaker. Being a class III/III+, it’s not entirely unsuitable for beginners, but there are lots of class IV rapids that come one after the other.

The rapids are beautiful and well formed, with none of that strong undercurrent but no froth. Here you'll hear the roar of the rapids and see the white foam piled high.

Cagayan De Oro River is recommended for the thrill seekers who want to hurl themselves down the rapids, battle currents, and feel the full force of Mother Nature.

The rapids are spaced out just enough for you to catch your breath, but not that far apart that you become bored and start a game of monkey spotting – there’re plenty of opportunities to score with tribes of monkeys hanging from the riverbanks trees.

There are plenty of reasons to visit the Philippines, the spectacular kayaking on offer being just one. If you’ve not already booked your tickets, I bet it’s now on your must-go list.

If you’re looking for more exotic locations to quench your travelling thirst, check out our kayaking holidays in our adventure travel section.