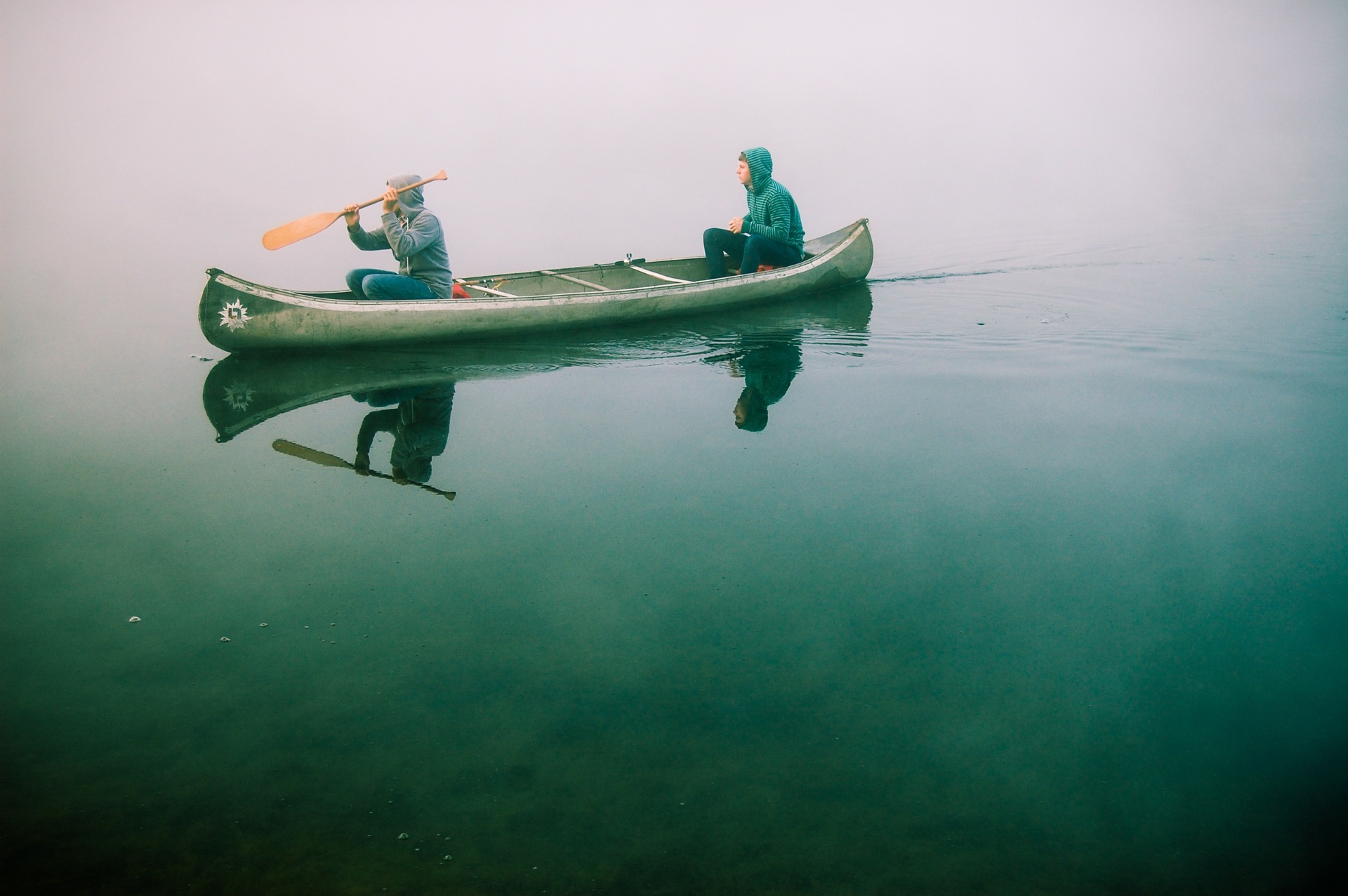 We all have tales of paddling trips that went horribly wrong, or where we grossly miscalculated the work involved. Exhaustion and doubt settle in, and turn adventure and excitement, into a dark and fearful time. However, when (and if) we make it through the other side, they make for awesome stories! What follows, is one such tale.

It’s brought to you by outdoor educator and ultralight traveling expert, Casey Fielder, who blogs about trekking and outdoor adventure at www.caseyfiedler.wordpress.com. Enjoy!

There are a few times in each person’s life where the perfect storm blows in off the coast, carrying with it promises of adventure and a new future self. This is a story of one of those times.

Clouds drifted lazily across the late summer sky of lower Michigan, and school was out but not for long. It was a summer of college, the exact date lost to history (and maybe some Facebook posts), but maybe it’s a better story that way.

Longtime friend Jay and myself sat on the back porch in our hometown. I was recently back from a summer of camp counselor work, and he was in town for a few days before we had other obligations. For now, however, it was exactly beer-o’clock, and the ideas were flowing.

Mistakes Yet to be Made

“Dude,” one of us would begin, “we should do something sick!”

Most of our conversations begin this way. Often, they end several seconds later.

Remember that perfect storm a-blowin’ in? Yeah, well, this time it came crashing ashore just after the end of that sentence and suddenly we had an idea.

“Let’s go paddle that river up north, bro.” A pause and then, “What’s it called again?”

“Dunno bro, let’s Google it!” Then the laptop was suddenly out, and the feverish research began.

“How much time you got before you go back?” I was asking Jay as I hammered away at the keyboard.

He might have slugged down some beer, I don’t know, but we’ll say he did because it helps my story flow. “Like…” the pause lingered, and I noticed he was probably trying to count, “like a week I think.”

He sat there looking like a lazy, homeless cat in the heat of the sun; torn jeans, shirtless, un-showered, and unkempt.

I found the river on the map (thanks, Google) and it read “Au Sable”. Wikipedia was my next stop (as all good research is begun). It read something to the effect of: “The Au Sable covers 121 miles of Northern Lower Michigan through amazing scenery and it’s sure to be an adventure for you and your bro.” Or at least that’s what I read.

“It’s got, like, six hydro dams and it’s about 120 miles long.” I slammed the laptop shut, having found absolutely everything I could possibly need to begin an educated and well-researched backcountry trip on no notice. “Let’s f***ing do it, dude!”

There was a long pause where we both sized up the idea. Those lazy clouds had made their way further across the sky, and our beers were gone.

“Okay dude,” Jay was always the easiest to convince of split second ideas, “but how long will it take?”

We decided we could paddle the whole thing in 3 days and that we’d set out on our grand adventure the next morning. With whirlwind precision or, that is to say, no precision at all, we set about preparing.

Pantry doors were flung open. Dry sacks were stuffed with just about any food not nailed down. A backpack got crammed with a few pieces of critical gear; stove, water bottles, a filter, a tent, and some other random stuff I’ll never remember.

“What about this family size can of baked beans?” A pause. “Toss it in.”

We parted ways, agreeing to meet early and set off on our grand adventure. Before setting off - A heavily loaded canoe and an enthusiastic Jay

Learning to Paddle the Hard Way

Less than 24 hours later, we started driving north, a 15-foot aluminum canoe strapped to the roof of my old Dodge Stratus (yeah we pulled it off).

Long since deemed unfit for water-going, this particular canoe was an old hand off we repurposed from my father’s days of duck hunting in the 80’s.

It was given to us with a sizeable hole in the bow which we patched by shoving a contractor-size tube of caulk into the hole and emptying the contents entirely. Needless to say, the damn thing weighed nearly half as much as the Edmund Fitzgerald and floated about half as well.

We had managed to get our hands on a couple of lead-inspired aluminum and plastic paddles (the kind that would cost $20 at Walmart). Paddle handles stuck haphazardly into the cockpit of the car as the compass pointed north up Highway 127 into the heart of Michigan.

If we knew at that point what lay ahead over the next few days, we might have decided it be a good idea to turn back. We were destined to have a run in with Beer Pirates who would try to steal our nonexistent stash of booze, come face to face with several Bald Eagles, and be extended an invitation to drink Jägermeister with a bachelor party and “get weird” (we declined the latter and accepted the former).

Over the course of the trip, the two of us would complain, bicker, give up paddling, and start again day after day, and we would end up on that damned beautiful wild river for days longer than we’d planned. Me, looking rather over it

Somewhere around day three, it became apparent we weren’t going to make it on time. Our shoulders ached every day, and we were pumping out a solid 30 miles often on flat water dam ponds.

After portaging several dams, we were about ready to throw away all of our gear to lighten our load. It was becoming more and more necessary to reduce weight.

“Let’s kill this big ass can of beans, dude,” Jay stood up proudly holding the can with its big brown label aloft in the morning sunlight. We’d paddled from dawn to dusk the day before. “They weigh like five pounds by themselves, and I’m sick of carrying them over the dam(n) portages.”

With a ravenous gusto matched only by young men paddling incessantly for days, we destroyed an entire family size can of beans right then and there for breakfast, packed our “crap” as we lovingly called our gear, and pushed the red, white, and brown aluminum canoe into the river.

Not long down the river, we found a spotted fawn whitetail deer standing nobly-knee deep in the river looking quite lost. He allowed us to paddle right up and take a few photos before splashing off and into the deeply thick red cedar forest.

Just before lunch that day, we ran into those notorious beer pirates; tubers on the river for the day who were much too intoxicated to function and who promised to board our canoe in search of booze. We paddled with renewed vigor as the bean farts settled in for the day.

Why Shouldn’t You Take Baked Beans on Your Next Paddling Trip?

When the person in the front of the canoe starts in with bean farts, and you’re tired, frustrated, and ready to get off the water, you’ll start hallucinating.

You’ll be tempted to pull that paddle out of the water, turn it sideways, and give them a good full power whack on the head and a shove overboard. You’ll reason that you’ve got to lighten the load and get that rancid taste out of your mouth.

With a little more thinking, however, you’ll restrain yourself. Suddenly you realize that when you switch positions, it’ll be your bean farts floating lazily backward across the water. As the canoe drifts on, your partner will have to suffocate in the results of your poor choices. Genius. We miserably carried that damned canoe and (seemingly) hundreds of pounds of unnecessary gear and extra food over, through, and around six damn dams over five days.

By the time we were done, I would have paid a king’s ransom for a lighter paddle. We swore to never attempt another paddling trip with so much excess gear and extra food.

We’d made the fatal mistake of not realizing that the extra weight in the canoe has to be accounted for in each paddle stroke and every portage.

Turns out we knew nothing about how long it would take to paddle 120 miles and portage six dams. We were two days late and found Jay’s car with a police notice for a parking violation.

There were days spent entirely singing songs we both had memorized from a shared childhood, and afternoons spent entirely in silence as we both paddled toward some seemingly unreachable destination. And although it was a journey from hell at times, I’m glad we went through it.

Now for some parting advice…

If you’re going to take baked beans on a paddling trip, take them out of the heavy-ass can, eat them in secret several hours before paddling, and volunteer to be the front paddler in your canoe.

Your partner will love it.